Barry knew it wasn’t right what he did, but he couldn’t help himself. Ever since he and Brody Thurman discovered that loose vent cover in the girls bathroom in fifth grade, he’d been hooked, he’d been a peeper. The thrill he got, knowing he was witnessing someone else’s private moment, and committing a forbidden act, was better than any drug.

Now that he was all grown up, he had perfected his skills. When his mother died three years ago, Barry took the insurance money and bought the duplex they had lived in together. He rented out the other side and after some modifications, including a webcam and some old fashion peep holes, he had a pretty nice setup.

The hard part was finding the right kind of renter. He didn’t want families, or dudes, but that seemed to be the only applications he’d gotten in the last couple of months. His most recent tenant had been a slightly overweight college student named Sandy. Sandy turned out to be a real sleeper, a bookworm who spent most of her time in bed with her cat. Barry had been disappointed, but he did get some good video of her in the shower. He still replayed those clips at least twice a week when he needed a fix. Problem with Sandy was she couldn’t pay her rent and eventually she had to go.

Things started looking up for Barry a week ago when a new girl moved in. Kila was a hot little firecracker with a full sleeve of tattoos and more piercings than Barry could count. He nearly melted into his loafers when she came over the first time to look around. She was rocking a set of fuchsia pigtails, and wore a tattered Misfits tee shirt over fishnet stockings. She was so close to the fantasy that Barry had a hard time believing his luck.

He had watched her through the webcam as she unpacked and set up the bathroom, L7 blasting from her IPod. There were times when it almost seemed like she knew he was watching, playing it up for him, but Barry knew better, he had gone through great pains to conceal the camera in the light fixture and none of the previous renters ever noticed it.

Although he liked the webcam, Barry felt that it was too sterile, it put too much distance between him and his victim. For the really intense high, he needed to be close, just a layer of sheetrock away. The danger of getting caught intensified the rush, and he needed to hear them breathing. He had placed a tiny peep hole in the corner of the bedroom at waist level that looked out right onto Kila’s futon. On his side of the building it was in the hall closet where he had taken out all the shelves to make room for a chair so he could be comfortable. He had it down to a science.

Barry pushed his eye to the hole and peered in. Kila was lying on the bed in a pair of black skull panties and a blood red pushup bra. Barry felt his pulse kick up a notch as she idly stroked her milky thigh with a single black fingernail while scribbling something in a yellow legal pad with an ornate silver pen. He remembered her saying she was a freelance writer when she signed the lease.

Barry watched as Kila’s nail traced lazy circles on her pale, flawless skin, creeping up toward the edge of her panties. Beads of sweat started forming on Barry’s bald head, and his breathing grew shallow and loud inside the small closet. Just as she hooked her finger under the hem of her underwear, Kila’s cell phone started vibrating on the nightstand and she got up to get it. Barry pressed his eye harder against the hole, trying to widen his view. He could feel the full body flush wash over him. It was so intoxicating that he didn’t want it to stop, it had been so long. For a moment he lost track of her, seeing only her shadow on the opposite wall. She was talking to someone and laughing. Barry caught a flash of her smooth leg from the corner of his eye, then the hole went black.

Barry’s brain could barely register the lightning bolt of pain that ripped through his face. He jerked back, falling out of the chair onto the floor of the narrow hallway. He reached up with a trembling hand and pulled at something metal protruding from his eye, it was Kila’s silver pen. The world had gone half black and a wave of intense agony exploded between his ears as he lay there writhing on the hardwoods. Through the fog of shock, he could hear Kila’s voice coming from the blood soaked peephole. It had a taunting lilt.

“Hey Barry, that was Sandy, she wanted me to tell you hello.” 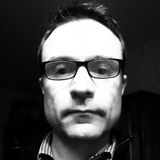 Bio:  J. David Jaggers lives in fly over country where he spends his days in the white collar world and his nights feeding the thugs, pimps and enforcers he keeps caged in his basement. He has been published in the usual places, including Near to the Knuckle, Yellow Mama, Spelk and Out of the Gutter magazines.

Comments Off on Peeper by Dave Jaggers

Frank had meant to make the place more secure, he just kept forgetting. But every time he opened up his barbershop and found one of the local bums sleeping on his floor it was a reminder that he had to do something about it. He had shutters that pulled over the front of the shop which he unlocked and lifted every morning – as he’d done today. It was the rear where there was a problem. The back door was just secured – or not as the regular break-ins suggested – with a padlock. He’d call someone today, he promised himself – get a proper door ordered, with built-in locks . But first he was going to have to kick another vagrant out and fumigate the place before his first customer rolled in looking for a pre-work short-back and sides.

The guy on Frank’s floor looked rough and smelled even worse – like something had crawled into his pocket and started rotting. His face was washed out white; another drunk with problems who thought Frank should share them.

Frank gave his uninvited guest a gentle tap with his foot to rouse him.

The sleeping man bolted upright and stared at Frank with vacant eyes, his long lifeless hair stuck to his face. If drink was the only poison he was under the influence of Frank would be surprised.

From his upright position the vagrant didn’t move. He was alert, like a guard dog woken by a sound at the window. Tense arms held him up like he was ready to pounce. Frank half expected him to start growling.

‘Come on, pal, you’re going to have to leave. I’ll have customers coming in any minute.’

The voice surprised Frank. It wasn’t that of a man sleeping rough. There was authority to it. He’d asked his question in a way that suggested he demanded an answer – it was more than a mere enquiry about the time of day.

Hearing the time seemed to root the visitor to the floor, he stiffened.

Frank was starting to get spooked by the man on his floor. There was no way he could stay in the salon – the smell was going to be tough enough to get rid of once he’d left, there was no way of masking it with him there.

‘You can’t stay.’ Frank was wary, but it had to be said. ‘The smell alone will put the customers off. If you’re not going to leave by yourself, I’m going to have to call the police.’

‘I really don’t want you to do that.’

Frank was spooked by the vagrant’s tone. It didn’t suggest he was concerned about the police but more the consequences for Frank if they were called.

‘Really? So… you’ll go then?’ Frank was nervous now, stumbling over his words. He couldn’t work out what, but there was something different about this guy. He’d kicked out rough sleepers in the past – plenty of them. He’d never really thought about it. There’d never been an issue – most had gone without so much as a word. He’d even given a couple a few coins for food as he’d sent them on their way. This guy was different.

‘Look, it’s quiet outside. Whoever you’re hiding from isn’t out there. I need to open my shop in a few minutes. Now if you’re on the run from the police or hiding from someone, do you really want my customers coming in and finding you? Better to go now and find somewhere quiet. Right?’

The vagrant was on Frank in a flash. There had been no time to move and yet he’d somehow closed the gap between them. Frank felt his eyes widen and his pulse quicken. The vagrant’s breath was putrid as he stood large over the barbershop owner.

The demanding voice now boomed at ear shattering volume. Before Frank knew anything about it, the vagrant had snapped his neck like he was twisting the lid from a jar, letting his body slump to the ground.

The vagrant looked to the front of the shop. Shutters up and door still open from Frank’s entrance. Frank had been right – the street outside was quiet. The vagrant walked with caution to the shop front. With one quick yank he pulled the shutters down leaving the unit in darkness. He slammed the door and the glass shattered.

The skin on his hands and face smouldered with blackened burn marks. His face contorted in pain. He had a minute at most. He bent to his knees, the pain reaching his core and radiating from there.

He crawled to Frank’s lifeless form. He’d been dead for just a few seconds. There was hope. He sank his teeth into the dead barber’s throat and drank. The blood was still warm… still alive.

The vagrant’s skin healed. He slumped against Frank’s lifeless body and slept. He’d move again when it was dark outside.

Bio: Aidan Thorn’s short fiction has appeared in Byker Books Radgepacket series, the Near to the Knuckle Anthologies Gloves Off and Rogue, Exiles: An Outsider Anthology, The Big Adios Western Digest and Shadows & Light as well as online at Thrillers, Killers ‘n’ Chillers, Thrills, Kills and Chaos, Near to the Knuckle, Pulp Metal Magazine, Shotgun Honey, Spelk and The Flash Fiction Offensive. His second short story collection, Urban Decay, is published by Grit Fiction and out now.

Comments Off on Barbershop Vagrant by Aidan Thorn